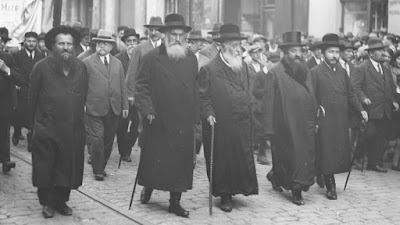 Before the Holocaust one-third of the Polish population was Jews. It was the reason why Warsaw was called at that time Jerusalem of the North.

The Holocaust changed everything and now there is no more than 15 000 of them living in our country. A group to small to make an impact on politics.

Still, the country faces claims on the restitution of their heritage. Claims that are foolishly resited by the Polish government. Antisemitism is a phobia and as every phobia is blocking a cold reason.

It would be better for the Polish nation to acknowledge these claims and state that they will be fulfilled from the money from the compensation that Germany owns Poland for the II World War destruction. This way it would only make Polish case stronger, as it will bring Jewish lobby into that game.

But instead of this, we hear from Kaczynski party that they are not a side and they do not feel obliged to pay for Jewish legacy to anyone. It's both sad and irrational.
Autor: Artur o 18:58