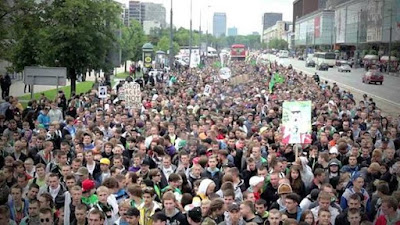 So it has happened I have returned to the March of Cannabis Liberation that once I was organizing. It was a silent return without trumpets and speeches.

I was sitting on the front of the congregation and was remembering someone. Someone that has died in mystical circumstances.

I was his close friend and for some time a right hand. I'm of course thinking about Joep Oomen from ENCOD. I told you my adventure with Americans, he was more tragic.

His body was found in March 2016 be a group of common friends on the morning in his house in Antwerpen. They have called for the police and asked them to make an investigation.

The police refused to make any citing nature as the cause of death. Of course, it is easier to say some junkie has overdosed.